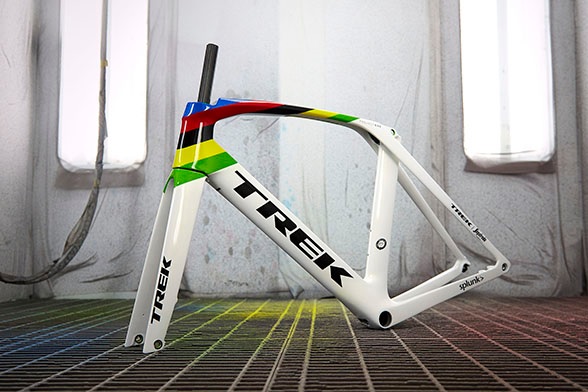 Trek-Segafredo's Mads Pedersen will debut his custom-painted World Championship Madone SLR at the Tour d'Eurométropole this weekend in Belgium.

"Mads' win was an incredible achievement," said Art Director Brian Lindstrom. "With his custom World Championship bike, we wanted to honor the new champ while honoring the DNA of Madone, keeping a clean, simple, classy design."

Pedersen's custom Madone SLR is has a classic white base and features bold World Championship stripes on the top tube and fork crown. It also features Trek-Segafredo team decals and signature personal touches: a World Championship decal and the words "All or nothing" and "Underdog" on the down tube.

The prestige of the World Championship stripes is not lost on the young Danish rider, who will finish out his season after Tour d'Eurométropole in Italy with Tre Valli Varesine on Tuesday, October 8th and Milano-Torino on the 9th.

"I still can't believe it," said Pedersen. "Earning World Championship stripes is a dream for any rider, and I look forward to honoring them this season and beyond."

Project One is Trek's custom bike program. It allows riders to customize every detail of their ride, from components to color, and offers endless options for paint schemes, including the six premium paint schemes of Project One ICON.