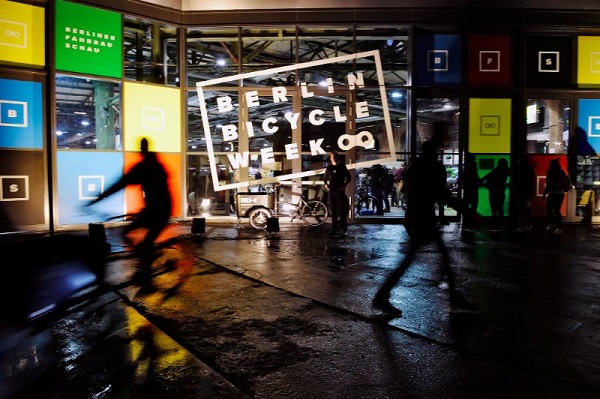 From March 3-5, 2017 for the eighth time running, the Berliner Fahrradschau opens its gates at the STATION Berlin. Europe’s most exciting bicycle show with its own unique concept presents the world’s hottest bike trends from brands such as Camagnolo, Canyon, Diamant, Shimano, Cinelli, ROSE, Assos, Ortlieb, Selle San Marco, Nevi or Van Moof and guarantees to be an experience for international visitors and trade professionals alike.

Throughout the 23,000 m2 of the award-winning event location, in addition to the stylishly designed exhibitor halls with six different areas, the program also includes all kinds of bike action: the BERLIN TRIALS CUP and trial workshops, a Cyclocross Race, a MTB Race, Electro-Bike-, CX- and E-MTB-Tests on expanded test tracks, Trick Bike Shows, BMX Flatland Shows and Workshops, the Childrens’ Corner with a Balance Bike Trophy, a Women’s Ride, CX Rides, Art & Photography Exhibitions all about the Bike, and the Bicycle Cinema with films and talks by athletes – to name just a few of the program highlights. All are invited to take part, try out, become acquainted, and be amazed.

What’s special about the Fahrradschau: Like no other Bicycle Trade Fair, it manages to activate and unite bicycling’s most diverse directions and scenes. Even the most die-hard bike fans are guaranteed to find something new here!

The Hottest Bike Week in the Republic

From February 27 to March 3, 2017, under the motto #cyclingunites the Berliner Fahrradschau presents the bicycle culture festival Berlin Bicycle Week. For an entire week, the capital is completely focused on the bicycle and throughout the entire city, the widest array of events invite you to take part and become a bicycle fan.

Among the many highlights: the Battle of the North – challenges on up to 13.3 kilometers of cobblestone tracks will put riders and racing bike material to the acid test. As well, at the legendary RAD RACE Last Man Standing velvet gloves are traded for furious fixies and the audience is driven to ecstasy – without brakes and gearshifts, the toughest riders battle for the title. More dignified, in fine threads and classic period style on retro-bikes, Berlin Tweed Day parades from Brandenburg Gate to the Station Berlin. For the Long Night of Bike Shops, for three days each evening, a wide array of programs are planned in the coolest bike stores of the city.

In addition: The King of Gravus Ride for all passionate CXers and fans of sophisticated frame construction, the Wall Bike Path for guided electro-bike tours along the history of Berlin, the Berlin Music Ride, a Classic Bicycle Market and much more exciting fare. Best to take a vacation now and stock up on sleep!

Discounted Early Bird Tickets for the Berliner Fahrradschau are available until January 31, 2017.

All info, regular updates and tickets at: www.berlinerfahrradschau.de

Cookies are short reports that are sent and stored on the hard drive of the user's computer through your browser when it connects to a web. Cookies can be used to collect and store user data while connected to provide you the requested services and sometimes tend not to keep. Cookies can be themselves or others.

So when you access our website, in compliance with Article 22 of Law 34/2002 of the Information Society Services, in the analytical cookies treatment, we have requested your consent to their use. All of this is to improve our services. We use Google Analytics to collect anonymous statistical information such as the number of visitors to our site. Cookies added by Google Analytics are governed by the privacy policies of Google Analytics. If you want you can disable cookies from Google Analytics.

However, please note that you can enable or disable cookies by following the instructions of your browser.