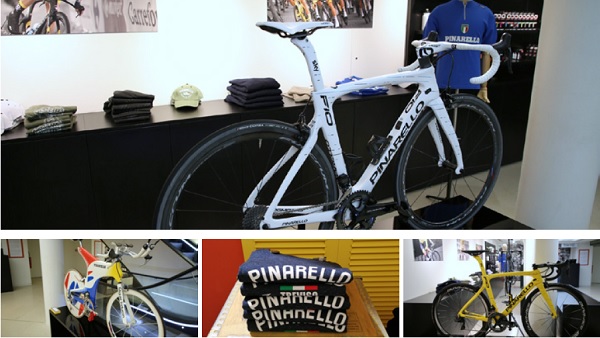 During the temporary exposition “La famiglia” dedicated to Italy at Le Bon Marché Rive Gauche, Pinarello presents l’Atelier Pinarello. A pop-up store in the heart of Paris, in one of the most exclusive locations in the world.

L’Atelier Pinarello is a unique and interactive place, dedicated to the Brand’s history and to cycling fans. Some of the models that made history are present, such as Miguel Indurain’s Espada, together with the latest Dogma F10 and K10 models launched in july, and also the Dogma F10 special edition TdF2017 to celebrate Chris Froome’s victory in the last Tour de France.

A bike fitting area allows the visitors to discover the perfect frame size and position but also to know better ho to set a road bike perfectly. Then a test area to try “virtually” the Dogma F10 thanks to connected Smart Trainers, to feel like being on the road.

On the other side of the Atelier, there is a workshop area and accessories displayed to open the way of customization.

In fact, personalizing a road bike is a real art. The choice of accessories is crucial and reveals a lot about the style and the taste of a rider.

Last but not least, a lifestyle collection made exclusively for Le Bon Marché Rive Gauche is for sale at l’Atelier Pinarello.

A team of experts is available to help visitors discover Pinarello’s history and find the models that fits perfectly to their characteristics and matches their own style.

Giovanni “Nani” Pinarello, was born in Catena di Villorba on the 10th July, 1922. He was the eighth of twelve children.

His love for two wheels and an innate gift as an indomitable fighter, led him to pursue a career in cycling.

In 1952, Giovanni prepares to ride the Giro d’ Italia gain, but at the very last moment, he is required to give his spot to the young Pasqualino Fornara. Giovanni is disappointed, but his team offers 100,000 pounds to set aside, a considerable sum of money for those times. This money is used to bear the fruit of what shall be the crown of this his dreams: opening a small bike workshop in order to build his own bicycles. We are now in 1953 in Treviso and Cicli Pinarello is born.

Today, with Fausto in charge, Pinarello is present all over the World and represents the absolute excellence in the cycling market. High end road bikes, still engineered and mounted in Treviso and capable to satisfy the most demanding customers and also the greatest champions Pinarello is Team SKY’s partner and owns the record of Tour de France won, thirteen in total. With Fausto, Giovanni’s dream goes on.

Fausto Pinarello: “in Pinarello we’re looking for innovation at all levels, and this initiative with Le Bon Marché Rive Gauche is a further proof. It’s a unique occasion to present our Brand in the most iconic place in Paris, offering to visitors a unique experience, made of consulting, services and emotions.”